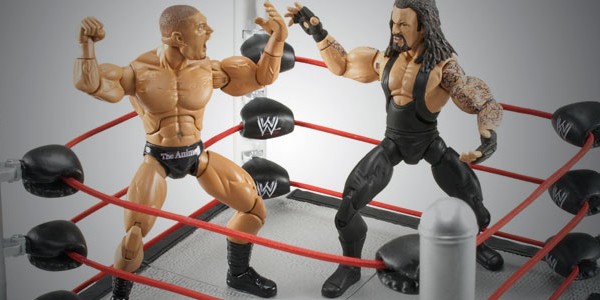 Twice Last week, I was subjected to the old saying: “Professional wrestling isn’t real”. Once in this article on the BBC about Kurt Angle’s attempt to make the 2012 Olympics, and once from a friend in the pub when telling them about the Impact tapings in London.

This, as I’m sure it does many wrestling fans, annoys me. It’s an off the cuff remark made by people that don’t watch or understand what it’s all about.

Now don’t get me wrong, I’m not mental or anything and I know that pro wrestling is a ‘sport’ with a certain level of predetermination (sorry kids, Cena doesn’t win through any kind of talent!*), but does the scripted nature detract from the athleticism require to perform in the industry. Of course not.

I’ve been in a wrestling ring. Once. I’ll be honest, once was enough. It was quite possibly the single most grueling thing I’ve ever endured and my body hated me for days. I played rugby for sixteen years and never felt as mentally and physically drained as I did after a mere two hours of suplexes, snapmeres and learn to take bumps.

It’s also pretty dangerous. How many serious injuries do we see in the ring?  Broken necks, collar bones, torn quads and even death. No matter whether there’s a script or not, it is right up there with the most dangerous sports.

Yet wrestling is frowned upon by fans of ‘legitimate’ sports, mostly it seems because the outcome bears no relevance to talent or skill. While in some cases I agree that it borders on the ridiculous (Rey Mysterio as Heavyweight Champion, any Cena victory), that’s all part of the appeal. Wrestling is show. Shows have a script.

Was ‘Lost’ a pointless thing to watch because it had a script? No. Until the end. Bad example. How about a soap? That’s probably a better comparison seeing as Linda McMahon referred to WWE itself as a soap running fifty two weeks a year. I often see update after update on my Facebook along the lines of “aw, Eastenders was so sad” or “I can’t believe X did Y in Hollyoaks”, which amazes me. These are shows. Their actors are more wooden than a WWE table (which probably says a lot).

Wrestling fans are like any other sports fans. We have our favourites. We have those we favour less. But it creates debate. Argument on occasion, but most importantly, excitement. And isn’t that the main thing from any televised event?

I suppose the point I’m trying to make is this; don’t knock it til you’ve tried it. Wrestling – or anything else – is not going to be for everyone. But before you look down on the guy (or girl) who’s a wrestling fan, maybe spend a couple of hours to see what it’s about.

I’ll be honest, a website about wrestling is probably not the best place for this article. It’s like trying to convert a Christian to Christianity. But hey, I thought I better contribute some kind of writing!