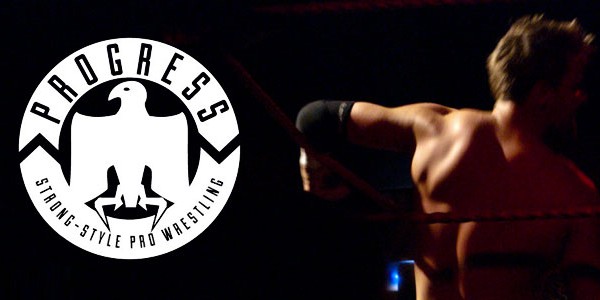 With my co-conspirators here at Total Wrestling packing their bastard bags and heading to bastard Miami for Wrestlemania like a couple of, well, bastards, I shall turn my hand to reporter for an update from this weekends inaugural Progress Wrestling show, right here in London, England.

I’ll be honest, I didn’t know what to expect, but the amount of promotion that’s gone down through Twitter and Facebook, plus the big name of Colt Cobana on the card, we were pretty up for the show, especially after an awesome Art of Wrestling taping the night before.

So lets get down to business with the venue itself. I’ve been to the Garage a few times for gigs and it’s pretty small. Bung a ring in there and wherever you are it’s an awesome view. Things look good already. The crowd is notably adult, not a kid in sight. Nor a Cena T-Shirt. And there’s beer flowing nicely from the bar. All good so far.

I’ll skip over the intro as without being there I fear it won’t be that interesting, plus I’m conscious we’re four paragraphs in an this is dragging like a recent Rock promo. So onto the first match.

Great match to kick things off. Dar played the heel character well, and the crowd showed their apparent distain for the Scotts inspiring possibly the most random of wrestling chants: “deep fried mars bars”. Brilliant.

The match itself showcased Ligero really well with some nice high flying maneuvers, and a great swinging DDT from form the finish. Our first finalist, Ligero.

These guys are easy to describe. Colossus would be the result of a love affair between Big Daddy and the Big Show. Cruz just wants everyone else’s personas, especially Zack Ryder (cue “Shit Zack Ryder” chant).

I’m not sure want it was about this match that didn’t quite do it for me. Technically it was good, and to paraphrase footballists, Colossus had a good touch for a big fella. I think, mostly, that the frantic opening bout and the comparative slowness of the second detracted from an otherwise good match. Kudos must go to the openers for that, rather than being overly negative here. Anyway, Cruz gets the win with a very familiar looking boot to the head.

I wonder what this match would have been had RJ Singh not had to pull out of the show. I’ve read good things about RJ so it’s a shame, but as the Progress guys said; some things are more important than wrestling.

So this match. Well. Loco seems to think he’s a dog. We open the ‘bout’ with Colt playing fetch with Loco. It’s mildly amusing, but I got the feeling Loco hated doing it as much as the crowd weren’t really buying it. We get into the match, and Cobana carries it mostly on his shoulders (along with Loco for a fair amount of time), but in the most part it’s light hearted – as you’d probably expect. Loco got the win in this one, much to the disgust of the crowd. But I saw Colt on Saturday, and he still had a load of merch to sell (to myself included!).

There was definitely something in the air about the next match – tag partners going one-on-one is always likely to produce a good match. This did not disappoint. Although a slow tempo in places, that just aided the notion of the usual team mates knowing each others move and picking their attacks carefully. To be honest, I got a little trigger happy with the camera in this so missed the finish, but Scrull got the win in this fourth semi final.

Cooper vs Allen vs Gibson

After a short break, we’re back with “The Man For All Seasons” Xander Cooper defending his BWC Scarlo Scholarship against Darrell Allen and Zack Gibson. Cooper play the heel champ to perfection, and probably was the best thing in this match. Until Gibson, with Allen on the turnbuckle yelled “EXPLODER”, to great amusement in the crowd. I don’t think we ever actually found out just what EXPLODER was. Gutted. Cooper picked up the win to defend his title.

Before you can have a championship match, you need a championship. We got one, but not the usual belt. No, that would be too normal. In Progress there is a Championship Staff. I love this idea. It has so many opportunities to be used as a foreign object. The only downside, as rightly pointed out by the crowd with a chorus of “Nazi staff”, was it did have a slightly Nazi-esque quality to it. (I mean quality as in look, not murderous efficiency).

4 Way Title Match: Ligero vs Cruz vs Mason vs Scrull

What a way to close the show, this match was mental! There were bodies flying everywhere, into the crowd, into rows of quickly abandoned seats – “Party” Marty necking a pint in the centre of the ring. It was absolute quality from start to finish. We came down to two, Cruz and Scrull and this was a great demonstration of how a crowd can change. In the earlier bout, Scrull had been more of the heel, but was now fully back by the crowd against the “Showsteeler”. It was a pretty good finish to the night with Cruz picking up the win and becoming the first champ – to resounding boos from those in attendance.

All in all, a damn good show – which considering it was their first really says how good it was. Bring on the next one. And the one after, because this really is Progress.