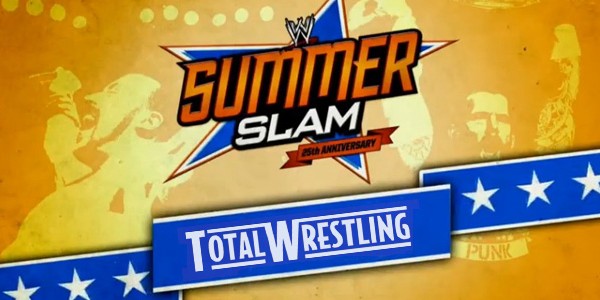 Let’s start with this: It seemed Summerslam was actually booked quite well. While I quite like Santino, I’m glad he was pushed to the pre-show – but in that respect it just shows how little the US belt matters these days – but it’ll be interesting what/if they do with it now in the run up to Night of Champions. Not only that, but there wasn’t any non-sensical matches (with the possible exception of the final match), such as Ryback squashings or the such like. Maybe because it was the 25th anniversary. Which it wasn’t. It was the 25th occurence. The anniversary is next year. But anyway…

True to form, being a bit behind are like minded bloggers from across the pond, I’ll not play-by-play the event, but try and give my thoughts on it. So let’s get started.

I like how Jericho can turn a crowd in an instant. He did it the first night he was back, and did it again a few weeks ago with some simple old catch phrases.
Facing Ziggler seemed a little odd to me. I was hoping Dolph would be medling in the championship picture – but hopefully WWE have better plans for that. This was a great opening match. In fact, it was just a great match. But who expected anything less? The result didn’t really matter on the night, but I guess this was Y2J’s departing victory on this particular run as it’s been long rumoured that he’ll be off shortly after Summerslam. If this is the case, it clears the Ziggler/Jericho feud for Dolph to hopefully have a title run.

The tag titles were on the line, which I was a bit surprised by. I thought they just had some belts! What’s more surprising is that the crowd – which sounded like a great crowd – were really behind the match. Although AW royally got on my tits, I do feel the PTPs lacked a bit of something in their corner. But they’re a good tag team in my opinion and I’m sure they’ll pick up the belts soon enough. 10/10 to the crowd for the Kobe chant, just because you could hear Michael Cole and King having to talk faster and loud to try and drown it out.

Kane/Bryan. Ok, so maybe there was one match I didn’t really see the point of. Glad Bryan won. Can’t really remember the rest if I’m honest. Oh, there was the post match attack on Josh Matthews – think we saw that with Lesnar a couple of months back. I think it’s a bit of a shame the Bryan gets over with the crowd, gets into the title picture and has some of the best matches seen recently in WWE with CM Punk and then gets bumped to the mid-card.

The IC match, Miz vs Mysterio, was another slight lull for me. I’ve never been a Mysterio fan. Not since he won the HEAVYWEIGHT title anyway. I’m not sure what they’ll do with the belt next though. I don’t see a lengthy Rey/Miz battle, not sure what it would bring to the table. But on the same note, not sure who else can challenge.

For once, I was fairly gripped by a World Title match. Maybe it was because it was higher up the bill, maybe they actually built a match well for it, but regardless, I found it pretty good. I didn’t care who won as I’m not a big fan of either Del Rio or Sheamus but I liked the finish. I also like the epic ‘boo’ from the crowd. I’m sure the WWE won’t play on it too much, but heel Sheamus I think would be far more believable than his curent offering.

I don’t like Triple Threat matches for championships. Bar one at the Royal Rumble in 2000(?) for the IC Belt. This wasn’t terrible, but it wasn’t brilliant either. And unsurprisingly wasn’t the main event either, but more on that in due course. With the dominance of Big Show early on, you knew at least one result wouldn’t happen, a Show victory. And then, a double finish. There must surely be something, somewhere in some kind of rule book that governs someone tapping to two moves. Logic suggests the first hold would be victourious. Apparently not. After some lengthy grubbling, presumably to allow Show to catch his breath, we get the match restarted – it didn’t last long, but I like the finish (story of my life right there!). Cena then stood still for quite some thing while being touched up by the crowd. Bit odd. Storyline wise, I think this will run for a bit. I’m not quite sure why they’re trying to turn Punk a bit, but it was evident last night that it’s not really working. I imagine, and to an extent hope, that Punk will retain for a while longer. It seems a bit odd to set up the Rock at the Rumble (something that’s possible been thought of since the first “pipe bomb”) then have it as a match we’ve seen before. But then, this is WWE. Fingers crossed we have a new title belt by then too. While it’s the spinner, it’ll always be a bit too Cena.

Now the “main” event. Was there a stipulation in this that the loser had to go on a diet? Both guys looked shadows of their former selves here. After a card of fairly fast paced matches we’re treated to a slow borefest. It reminded me of Brock/Goldberg. The crowd didn’t like it either as the boring chants rang around the areana.
The build up to this, made great by Heyman was just that. Great Heyman promotion. Bringing Shawn Michaels and Steph into things didn’t make me, personally, give two shits about it. Actually, I didn’t even give one shit. Sure there were good parts to the match, but I think it was a reminder of how WWE used to be when dominated by big pigs. I was surprised by the lack of Shawn, after Simms theory on it, I was a little excited. Sometimes I do wish he wrote the scripts!

The most interesting thing about this was HHH’s exit. It reminded me a lot of the exit of Mick Foley a decade ago in his retirement match. I was almost moved. But then, if history repeats, Trip will be back in action within a couple of months. We’ll see I suppose.