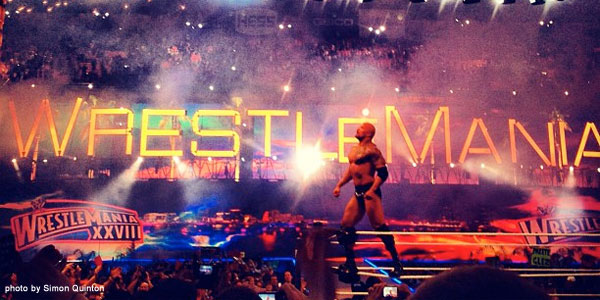 I’m sure everyone saw WrestleMania who’s likely to see it, so I’m going to avoid doing a blow-by-blow report and point out a few highs and lows from the showcase of the immortals.

Well, it was bloody huge wasn’t it? But a couple of things. When it’s still daylight, let’s be honest, it loses some of the sparkle. Once the sun had set the place looked incredible. It’s a testament to WWE – and to a degree the Rock no doubt – that they can fill such an epic venue, but is it too big? Being up top must suck, plus on TV some of the atmosphere seemed to be lost into the sky. No doubt inside the arena, it was incredible.

Oh dear. What an epic let down. I was really interested to see how they played this match, and we didn’t even get one. I’ve read today that this had been a plan for a while. A while, let’s be honest, is plenty of time to determine it’s a shit plan. A properly shit plan. I’d have let it go if the time the match would have taken hadn’t been filled by the likes of Brodus Clay, MGK and Flo Rida. It I want to see music I’ll go to a gig, or stick on some from of music channel. For a wrestling pay per view, I’d like some wrestling over and above all else.

If I was either of these guys, I’d be pretty disappointed with how this went down.

The matched that weren’t the “big 3”

Kane vs Orton wasn’t too bad. Actually, I thought it was quite good, bar a slightly untidy finish. Good enough to kick the event off properly.

Big Show vs Cody Rhodes was also good in my eyes, and I’m happy with the result. Hopefully this will be the door to push Cody on a bit towards the top of the mountain.

Team Johnny vs Team Teddy didn’t suck anywhere near as much as I thought it would. Some good showings, Truth, Kingston and Ryder simultaneously leaping the top rope was a nice spot, and Ryder got a bit of ring time – I’d forgotten he could wrestle! I think the result was inevitable, but at least the match was ok.

Embarrassingly, Kelly Kelly & Maria vs Beth Phoenix and Eve is the only match I called right over on my “predictions and predilections” post. Still, it was ok for what it was.

Not sure there was the need for the added DQ stipulation, it didn’t really add much to the match. If Punk had gone to town with a chair and chosen defending his family over the belt, I’d have bought it. Overall this match was exactly as I, and probably everyone, expected – a good WRESTLING match.

Best on the card for me – showed you can do HIAC on PG, and more so that you don’t need to leave the cage for it to be good. Found “Mr Wrestlemania” a bit odd in the match to be honest, I got the standpoint, but his promo beforehand didn’t carry through to the match. Nice super-kick though. And a good finish.

The Rock vs John Cena

Well, this was interesting for many reasons. The Rock looked fresh and Cena looked, well, like Cena. Overall though I loved this match. It was classic Rock, even, and the crowd seemed really pumped for it. And we got to see two of the most ridiculous moves in all of entertainment in one match. Part of me was hoping for a Scotty 2 Hotty run in for the Worm to complete a set. The Rock won, so I went to bed happy!

Loved to see the genuine emotion from Edge when the HOF class were announce, nice to see how much these guys care about fan reaction and the business.

On the subject of HOF, does anyone else find it odd that even when being inducted, Mil Máscaras, you still have to wear a mask?

Was nice to have JR doing commentary for the Taker v Trip match (apparently at Taker’s request). Just a shame he didn’t do the whole event.

There were some ace signs – plenty of “If Cena Wins We Riot”, but my favourite goes to the person with a mini white board. With Cena having the upper hand it popped into view saying “Grab the torches and pitchforks”. Brilliant. On the flip side, there was a guy in the front row, hard camera, probably about 25 years old in the new Cena shirt and (also new) Cena cap. On backwards. To you, sir, I found you annoying. And it made me even more happy that you were front row to see Rock get the three count. (I’d not normally pick out a fan, but there was just something about him!)

Shame there were no surprises. No screw jobs. Nothing. Which I find a bit odd, but also interesting as, with the exception of Bryan and Sheamus, we pretty much have a clean slate going into tonight’s Raw – Let’s see what Johnny has in store.

Now, finally, this is both awesome and annoying. I managed to see my colleagues in the crowd at the end. It’s awesome because for a brief second, there were two people I know on screen at the biggest wrestling event of the year. Plus Si got the awesome pic at the top of this post. The annoying part, well, I was in London watching that!